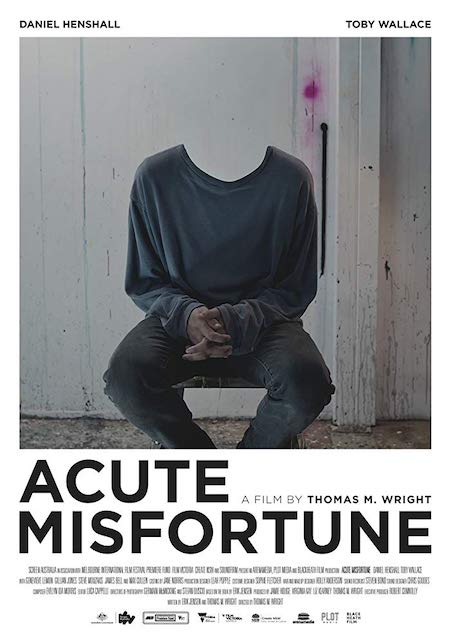 The film adaptation of Erik Jensen's award-winning biography of Adam Cullen is the story of the biographer and his subject, as it descends into a dependent and abusive relationship.

Luke Buckmaster's story is headed:
'Profoundly traumatic': how Adam Cullen's story was retold for the screen
Writer Erik Jensen and film-maker Thomas M Wright fought ‘tooth and nail’ on the adaptation – and called in Christos Tsiolkas to mediate

Does Australia celebrate the wrong kind of people, and the wrong kind of art? This question bounced around my mind for days after watching Acute Misfortune – a beautifully made and intensely thoughtful portrait of the life of controversial Archibald-winning painter Adam Cullen, based on the journalist and Saturday Paper editor Erik Jensen’s wild and compelling book of the same name. ...
This is an enthralling drama: the best and most interesting Australian biopic since Chopper in 2000. Like the director Andrew Dominik’s great character study, starring Eric Bana as the notorious criminal and shit spinner, Acute Misfortune works on several levels – including a rumination on a famous eccentric that peels away the gloss of legend. It prefers posing questions – like whether this country celebrates the wrong kind of people – to drawing conclusions. Luke Buckmaster, Guardian (review).

The film is an adaptation of Erik Jensen’s biography of the artist Adam Cullen, who the author – formerly a journalist for the Sydney Morning Herald, then the editor of the Saturday Paper, and now editor-in-chief of its publisher, Schwartz Media – was first assigned to write about when he was 19.
Wright and Jensen co-adapted the script, structuring it with two essential narrative trajectories. One points upwards, exploring the coming-of-age of the young and impressionable Jensen (played by Toby Wallace); and the other downwards, recreating the sad final chapter in Cullen’s alcohol-soaked and heroin-filled life. Luke Buckmaster, Guardian (article).