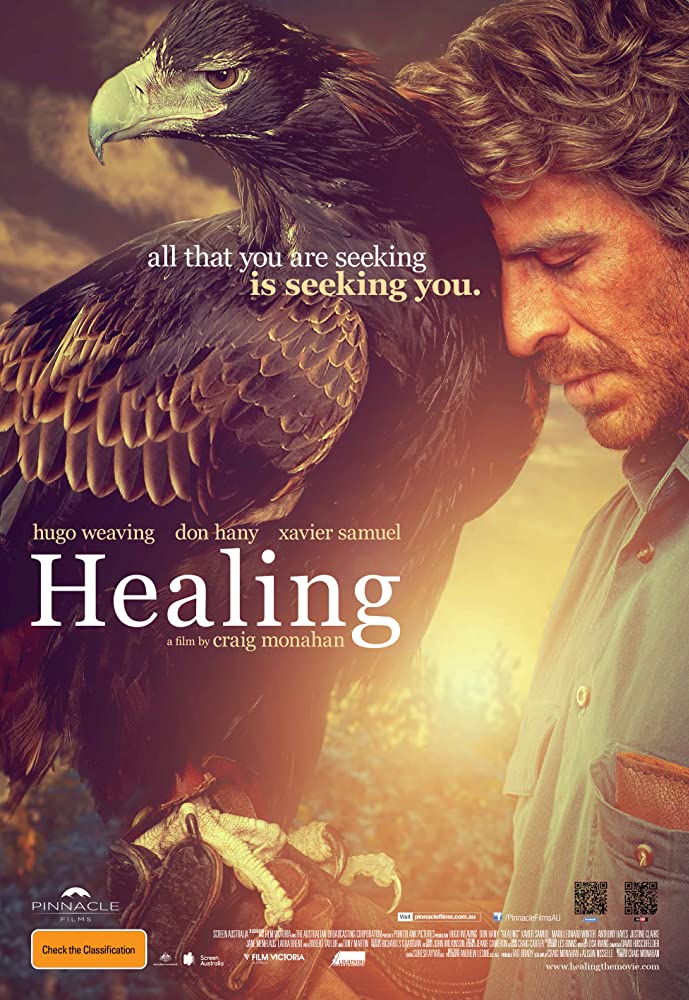 The birds are the real stars.

I don't have much to add to the reviews below. I would stress the fine photography of dp Andrew Lesnie, and the necessity of David Hirschfelder's music to paste the whole thing together: it's a bit intrusive, but necessary, as the script is a bit patchy.

There's a sub-theme that none of the reviewers have mentioned. Don Hany's Iranian character is identified as a Muslim, and one of the minor characters has lines just for the purpose of representing an anti-Islamic attitude. It's as artificial as the creation of Anthony Hayes' character, who exists only to provide conflict, as Luke Buckmaster points out.

Finally: the acting. It's always risky putting too much of the burden of a show onto Dan Hany, as he's not an intelligent actor. In this case his 'broken English' is not convincing: he was born in Sydney. Hugo Weaving is an enormous asset to this film, as he is to Australian cinema generally; he's in all three of Monahan's features, by the way. Without him Monahan would have no portfolio. I don't remember noticing Xavier Samuel's work (tho there's a lot of it) sbefore this: he's good in this, subtly underplaying his (consequently intriguing) character. His friend Mark Winter is the opposite, confusingly over the top.

A group of conflicted men, prisoners and inmates discover the majesty of great birds — and through them, the cleansing power of redemption — in the deeply felt outdoor drama Healing.
The first film in a decade from director and co-writer Craig Monahan, whose 1998 psychological thriller The Interview remains an uncommonly smart genre piece, this equally intelligent and satisfying item will prove therapeutic to distribs on the hunt for quality fare.
It's refreshing to see a film that takes its own sweet time building characters and the subtle conflicts simmering among them. Led by the familiar and bankable Weaving, the cast, under Monahan's sure guidance, deftly underplays what could have been, in other hands, an awkward melodrama.
Ace d.p. Andrew Lesnie's immaculate widescreen photography is the next best thing to being in the bush at the magic hour, while longtime Monahan associate Suresh Ayyar's intuitive editing reinforces the slowed-down pace of country life. Eddie Cockrell, Variety.

At its most simplistic, Healing feels like a glossy postcard drama, its pointy bits smoothed over by an unashamed sense of spirit and optimism. It is also a tender, thoughtful and inspiring film from an under-appreciated director. Luke Buckmaster, The Guardian.

The ensemble cast has a close rapport. As the tight little team of prison workers, Weaving, Tony Martin, Robert Taylor and Justine Clarke display the easy familiarity of people who have been colleagues for long enough to respect one another's idiosyncrasies. And as the ranger from the bird sanctuary, Jane Menelaus behaves as if born to the job. Sandra Hall, SMH.

A simmering menace permeates the script but the threatened violence never eventuates. Instead, the focus is on uplift, with David Hirschfelder (Australia) providing a spirited symphonic score and Oscar-winning Australian cinematographer Andrew Lesnie (The Lord of the Rings trilogy) beautifully tracking the flight paths of the magnificent birds of prey. Megan Lehmann, Hollywood Reporter.