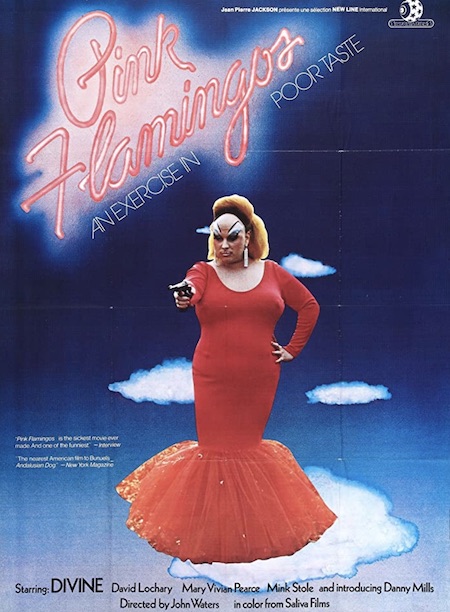 I’ve seen some really bad films lately. Working downwards … Ilsa She Wolf of the SS (Don Edmonds, 1975) was camp enough not to be taken too seriously, so I persevered with that one. Not so a John Waters film (Pink Flamingos, 1972). I think I get the idea: everything’s in the worst taste, and done as badly as possible, which in itself may be attractive for Waters’ audience (who were perhaps the ppl in the film) but I couldn’t get through the whole thing. But there is nothing at all even remotely good about Letter to Eros (Josko Petkovic, 1998).

Variety on Pink Flamingos:
Around the above premise spins the nitwit plot of the poorly lensed 16mm picture Pink Flamingos – one of the most vile, stupid and repulsive films ever made. Divine’s Mama Edie, a huge mountain of adipose tissue, inhabits a playpen in the mobile home and performs coprophagy on the fresh product of a miniature poodle while ‘How Much Is That Doggie in the Window’ toodles on the soundtrack.