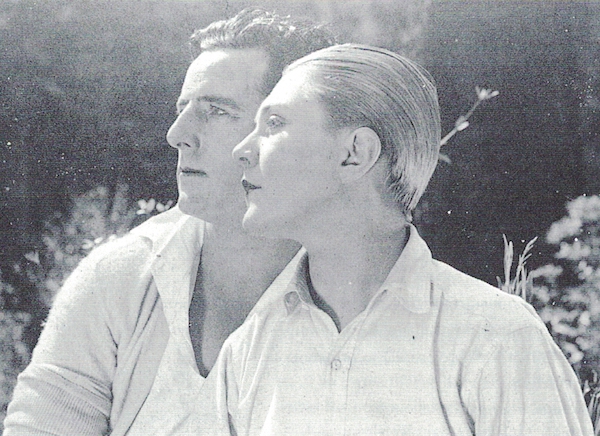 Pike & Cooper:
The plot of Jewelled Nights was not promising. After her father's death, a young socialite, Elaine Fleetwood, promises to marry a man she does not love, but dramatically deserts him during the wedding ceremony. She cuts her hair and, disguised as a boy, goes prospecting in the rugged north-west of Tasmania. There she meets a handsome miner, who, after many adventures, guesses her true sex. He saves her from a villainous rival and they are eventually married.
Actively promoting their work throughout production, Louise Lovely and Wilton Welch approached the film as they had learnt in Hollywood, making few concessions for local conditions. Australian film-makers at this time generally avoided complex studio work in favour of location shooting, and Australian studios lacked facilities to match the sophistication of those in Hollywood.
Undeterred, they improvised a studio, first in the skating rink of the Glaciarium in Melbourne and later in Wirth's Circus building, the Olympia. A series of elaborate sets were built, including the interior of a cathedral, but the most extraordinary studio exercise, quite unlike anything attempted before in Australia, was the staging indoors of a fierce storm in a Tasmanian rain-forest. Truckloads of earth, shrubs and trees were installed in the studio, the local fire brigade played hoses on the ceiling, and an aeroplane engine mounted on a truck created the wind. Other scenes were shot in the palatial homes of Melbourne, at the Flemington racecourse (for a scene of the Melbourne Cup) and on location in the Tasmanian forests. The total production cost rose to over £8000, of which £3000 alone was spent on preparing the studio. Pike & Cooper: 126-7.